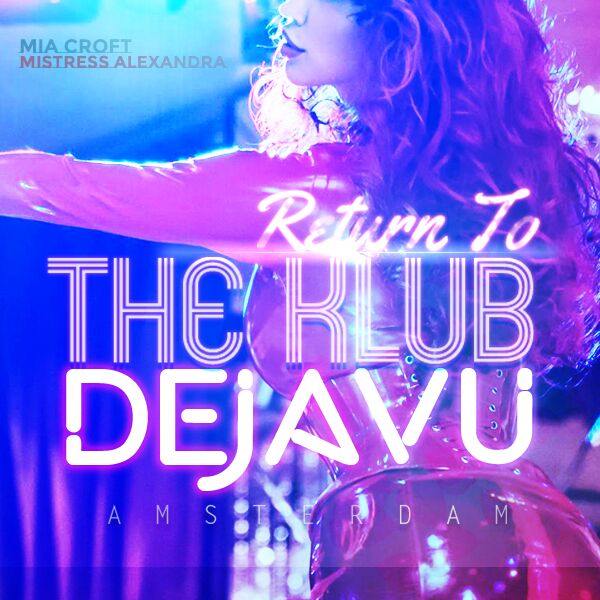 My Klub in Amsterdam. A few lucky boys have been there with me, partying and trancing the night away, having the best night of our lives at Klub Deja Vu 1 – Directors Cut. Sexy dominant women, great music, and a loop of events that left you confused and aroused beyond belief.
After a full renovation of the Klub, we will be reopening the doors for the ultimate erotic experience. This time, I’ve hired the best DJ’s in Amsterdam and all my girlfriends will be there. Perhaps one of them will join us in the corner booth and we’ll teasingly take you down deep together. Perhaps we’ll hit the dance floor. And perhaps, we’ll show you what’s behind that red door…

Return to Klub Deja Vu may just end up in your top 5 all time THM sessions. I know it’s up there on my list. At 80+ minutes and 10+ layers of voice, music, and sound effect tracks, this session will sweep you off your feet quite literally. Spirals, ASMR, whispers, sexy Dommes… allow your fantasies to become reality, at Klub Deja Vu.

Copyright © 2019 by TheHypnoMistress
All rights reserved. No part of this session may be reproduced, distributed, or transmitted in any form or by any means.

Holy Mistress!!!
Mistress Mia and Mistress Alexandra are going with us in the legendary Klub Deja Vu?
This will be such a pleasure.

It sure will be. Just imagine.. sitting in between the two of us in a cosy booth at the back of the Klub.. Mistress Alexandra on one side, Me on the other. And as she whispers her commanding words in one ear, I repeat them in Dutch in the other. Mmm

After reading the description and now my Mistress’s reply … I know excatly where my tent is, it has given me an impressive notification.

Hey there sexy Support lady. How does a fella get his avatar to show here – do I need to open an account or something?

You have to do it through Gravatar, make sure its the same email you use here, and well, I’m not the support lady here, but I hope this helps either way

I brought my blanket along to sleep there in the front doors of the club, this place will be packed in minutes after it opens!

That was insane. I cant believe everything that happened to me at Mia’s Klub. I Loved being hypnotised by two sexy Dommes at once, with Mia turning my brain upside down with her wicked-sexy Dutch induction – hypno-sex for the ears.